When Christopher Jones joined the Clark School as a Ph.D. student, he already was a Captain in the U.S. Air Force with two master's degrees under his belt.

What initially attracted him to the University of Maryland was its highly ranked Alfred Gessow Rotorcraft Center.

"I was working on missiles and space, and wanted to do something different in aerospace," he said. Specifically, he chose the Clark School to research helicopter flight dynamics.

Though he carried a heavy research load as a Ph.D. student, Jones made time for community outreach with elementary school students and tutored undergraduates through organizations such as the Clark School's Center for Minorities in Science and Engineering, the National Society of Black Engineers, and the American Institute of Aeronautics and Astronautics.

He was driven to help others because of the rigors he had been through with his earlier degrees. Moreover, he believes engineers should pay forward assistance they received during their studies. In his commencement speech to the Clark School Class of 2016, Jones urged the graduates to do the same.

A big reason Jones was able to volunteer was the financial assistance he received from the Clark School and the National Science Foundation. Because he did not need to work while a student, he could instead spend his available time sharing his love of engineering. It's also why Jones stays connected to the Clark School and gives back as an alumnus.

"People had to have given money for me to have gotten a scholarship. Somehow, somewhere, someone gave money and that ended up in my pocket," Jones said. "Anyone who donated to me, I give back."

He also gives his time by mentoring students and alumni, as well as serving on the Clark School Board of Visitors.

His participation as an alumnus is not just personal, but also practical. His employer, Northrop Grumman, hires a lot of Clark School graduates. Still, his affinity for the Clark School is primarily personal and in gratitude for the financial support that enabled his doctorate.

Reaching for the Sky 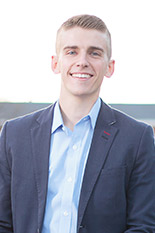